I'm convinced there must be a secret league of quilters. Why? Because my Aunt Elise and Uncle Dave discovered I'd gotten into quilting through the aether (or a grandparent, still not discounting secret communication lines) and sent for Christmas some of the most useful things I think I've ever not known I needed.


Those little sticky things are quite possibly the most awesomest (totally legitimate word, I'm an English major, I would know) things to have been invented since sliced bread. Jess has run out of fingers for counting the number of times I've accidentally cut something wrong because it slipped on me. This? This is pure genius.


They also sent me a lovely note (thank you again!), a fat quarter pack (which I'll show off soon, I promise) and a flying geese ruler. I have the best relatives ever.


And that's right, just to make myself regret this entire venture, I'm trying to do triangles again. However I have a ton of tools to help, and hopefully a bit more skill. I'm doing the Gaggle of Geese block from my 501 Rotary Cut Blocks, mostly because it looked cool and hopefully wouldn't be too difficult. 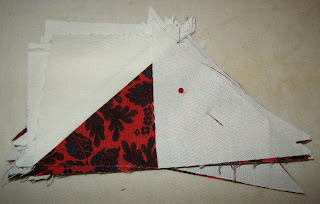 So yes, it looks like I've gotten over my mental block with triangles. At least the flying geese type. Woo! I think I'll keep making the blocks, see what I come up with. Maybe I'll have them on the sides as a kind of a border, and have a different block in the middle. I don't know. I started this mostly as a way to experiment and get back into quilting but I think this is going to become an actual quilt, since I just so happen to have a spare craft size batting package lying around.
I have some more quilts planned, which I'll talk about later. It looks like Tuesdays are going to be my major update days, so make sure you stop by on Tuesday evenings to see if I've updated. Also, please subscribe using the form to the right; it will send you an email when I have a new post, so that way you'll never miss a post. :)
Stay toasty!
Marisa
Email Post
Labels: show-off store