So on Friday I got an IM from Glenn, asking me what I was doing this weekend. Expecting perhaps a surprise visit I replied, "Just about nothing, why?" It turns out that Ann had heard through the grapevine about a quilt show that was, and I quote, "Close to Utica". Intrigued, I looked it up on Google Maps--only 38 minutes? I could totally do that! I could pop up there, have some fun, enter in a fat quarter drawing contest, and get some ideas for quilts in the future once my disaster quilt was finished.

Well, this sort of turned into a disaster trip. I milled about in the room until noon, deciding to treat myself to Dunkin Donuts for breakfast, since I was going on a trip and all. This will be important later, for when I got to DD it turned out they had nothing. No bagels, no muffins, no biscuits, nothing. I blame the soccer moms. It's always the darn soccer moms.

"That won't be a problem," I decided, "I'll just grab something on the way. Google Maps said I would be heading east on 90, there's a rest stop and food about half an hour away." I then looked at my GPS: the ETA was about an hour and a half. Considering the GPS had yet to fail me, and was sending me north, I decided to trust it. If I wound up in the wrong place, I could still have fun exploring. If I actually made it to the quilt show, so much the better. Besides, there had to be a DD somewhere along the way. Right? Riiiiight?

Nope. I made it to Old Forge alright, but there was not a single drive-through type place to be found. Tired, grumpy, and ready to contemplate gnawing off my own arm for nourishment, I decided to go to the quilt show first instead of getting food because there was only 15 minutes to go until the fat quarter drawing.

I entered into quilter's paradise. 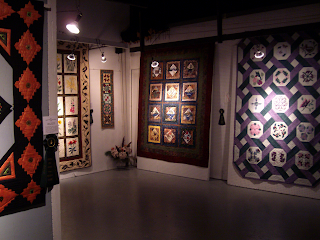 There were so many beautiful quilts on display I completely lost count. The Old Forge Arts Center is a quaint old building, the sort of display hall you find all over the place in the Adirondacks and a bevy of helpers, all volunteers to guide you about the place. They were amazed to see me, asking as if they thought I were a joke, "And you're a quilter?" I guess that's what I get for getting into 'old-fashioned' hobbies!

The quilts were all spectacular, even the ones that didn't win any prizes. I got to look at over seventy beautiful quilts with all sorts of styles represented in their ranks; I think I got pictures of most of them, but of course I missed out on a couple either because I couldn't get a good enough angle with my camera or because they weren't quite my thing.

Then the awards ceremony came, and I heard what is beginning to be a constant refrain when I read quilting blogs, "We are a dying breed; few people want to learn to quilt anymore." I'll save my thoughts on that for another day, but it was interesting to hear the twist that quilts made by people like you and me are becoming much more valuable due to this scarcity of quilters. Interesting, but I don't think anyone's going to want to buy my quilts, at least not for a while yet.

I didn't win the fat quarter drawing (poo! there were some really nice ones too), but I had fun wandering around Old Forge. I've been up there before for a kayaking expedition, and it was fun to be able to mosey about. There was an art festival or something with live music and a whole mob of folks just exploring. I did eventually get some food at the Adirondack Pizzeria... around 2:45. For someone with low blood sugar, this was probably not my wisest move, as the resulting headache and general yuckiness kept me company the whole ride home. I'm just lucky I didn't pass out!

All in all it was a ton of fun, although I was too timid to talk to any of the quilters there. I'm sure they would have loved to share tips with me, but alas I was too hungry and tired to muster up the courage. Perhaps next time!

I have a ton more pictures on my camera card, I'll post them next time. :) For now I'm going to enjoy the sun and work on the book.
Email Post
Labels: old forge arts center quilt show