So, on top of getting engaged, and flying to Canada, Glenn and I moved to a lovely townhome not too far away from our old apartment. The bonus? I got my own quilting room/office!


My desk survived the trip intact, though it was very tempting to leave it behind given how bulky and awkward it is! I also stole Glenn's printer, which makes it ever so much easier to print out my pattern instructions. Now I don't have to bother him every time I want to print out coupons or directions to a new quilting store!


I picked up an uber cheap shelf from IKEA that now serves as my fabric shelf. I don't think I ever showed off the shelf I picked up from the thrift store, but having everything in plain sight is lovely.


We also got a lovely little desk from IKEA to be my main quilting desk. Eventually we'll cut out an insert for Gideon to lay in so he's flat on the table, but we have to wait until after Christmas. Thankfully I don't think I'll be working on any full-blown quilts before then! The little bit on the left is on wheels, so I can extend it or hide it as I need to.


It's a great setup for me. I might eventually snag a chair to just use for quilting, but for now I just move my desk chair over by a few feet to quilt. The biggest boon though is that I don't have to clean up after each quilting session. I have never been so happy to make a mess and leave it there! Glenn doesn't have to deal with it at all, and so far only a few bits of thread have made it beyond the doorway. :)

It's a little dark in the photos, but I also have a closet! It's mostly non-quilting stuff, but on the right hand side you can see the machines and ironing board. The ironing board has actually been moved to slide neatly between the wall and fabric shelf, which makes it much easier to pull out for ironing.


And this is the crown jewel of the entire set up. I was talking to Neenie on the phone a few months ago, and mentioned how much I had loved her MW cabinet. It's gone to live with my aunt in California, but Neenie promised to look for one when she went to NH this fall. Sure enough, she found not one, but two! One for me and one for Christina. I love it so much; I haven't had a chance to move my quilting stuff into it from the storage containers, but it's going to be so much easier to find my stuff! I've already started using the left hand side to store all my scraps, and the right hand side for yarn.

And as a fun bonus, right before I left for Canada, I received an email from The Quilt Show that I'd won the TQS Snapware Giveaway! I actually thought it was a spam email at first, but how many quilting spammers are there? When I got back, I found a lovely little package from The Quilt Show with my new storage containers. Considering that they usually cost about $10 a piece from Jo-Ann's, it was a great deal!

I think that's about everything; I did get a little quilting in this past weekend and during the hurricane, and I'm hoping to do some more this weekend. We finally got the last of our stuff out of the old place this weekend, and we have declared this coming weekend to be a weekend of unpacking and rest. 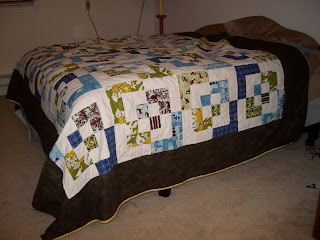