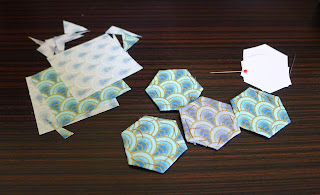 This is such a neat little project; The Round Bobbin is a quilt store that opened just down the road from me (45 minute walk on foot--lovely way to get some exercise!), and as a part of their grand opening celebration they're  asking folks to do a little project that will become part of the 'store quilt'. 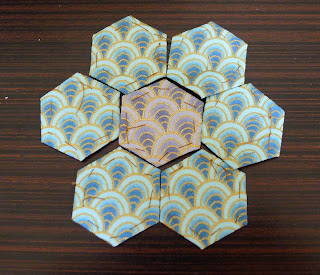 I've never done hexagons before, but I'm finding them to be a ton of fun! I have to wear my glasses to do the tiny stitching. I didn't think my eyes were that bad these days, but if I don't I just can't make out how much of the fabric my needle caught.

But how is Gideon, I can hear you cry. Don't worry!

I spent yesterday doing my best to strip off his original paint. The paint stripper I bought worked just fine, I think I was just such a nervous nellie about working with such toxic stuff (it melted through one of my gloves at one point--yikes!) that I couldn't get as much of the paint removed as I wanted.

I don't think it's the end of the world though; the primer should help to even out the spots where I couldn't get all the paint off, and I sanded it down enough that I think we'll be in good shape in the end. I also ordered his new decals, which should get here by Thursday. That will leave Gideon with plenty of time for the primer to dry and cure.

Today's task is to apply the primer and get that dried before the end of the day. Not sure how successful I'll be at that, but I'm pretty confident of my ability to paint this. At the very least I know I'll have tried my darndnest to restore Gideon to his prior glory!