With such lovely, cuddly, snuggly kitties, it's a wonder I got anything done today!

Seriously. First Baron trapped me, then TC came out of nowhere to snuggle. Hilariously  TC didn't want to encroach on Baron's turf, so it took her some time to work up the courage to cuddle up against my side, a respectful half-foot away from the slumbering beast that was putting my arm to sleep.

But in the end, after cleaning the house in preparation for the landlords (who are thrilled with us, even with my fabric everywhere XD), running out to Target so Glenn could get a 3DS (which I have been making grabby hands at all afternoon), getting cuddled to death (see above), plus a spot of food, I managed to make some headway into the next section of JT2.

Now, I couldn't finish the assembly of the first quarter, because that darn Lemoyne Star was just beyond me. I don't know what I'm doing wrong, I swear I'm following everything correctly  and that I cut everything correctly, but it's just not coming together. Luckily, when Shelley and I went out to lunch on Friday we discovered that we each have the ruler the other needs! So tomorrow I'm hopefully going to lend her my Deb Tucker Wing Clipper in exchange for her Lemoyne Star ruler. If that doesn't work out, I asked the lovely ladies at The Round Bobbin to keep an eye out for one or two. It's a bit of money, but worth it since I'll be able to use it again and again.

Instead, I decided to take a stab at the Cathedral Windows from the next section. Unfortunately, I had a series of herp derps that meant I didn't get to finish the block before I had to sit down to write the post, but hopefully I will have my brain together tomorrow. Observe, proof positive that I do indeed show my work, even when I mess it up horrifically! 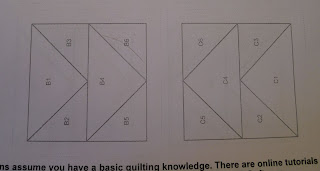 Oh look! An awesome flying geese block! I know, I'll use my wing clipper ruler, and this will be a cinch! 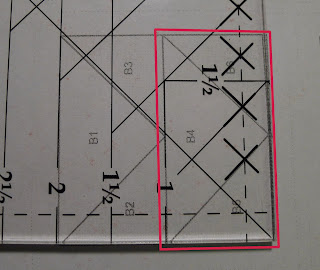 Aw muffin, it's a weird size. Man, I really should pick up the Wing Clipper 2, if the JT2 quilt is going to keep doing odd things like this. It's so annoying! Sigh. Oh well, I'm sure I'll get a chance to use it again. 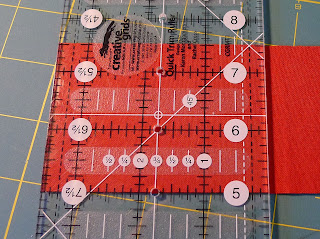 Cut cut cut. I'm so spoiled, I don't like to do paper piecing any more, it just never turns out as... Wait a second. 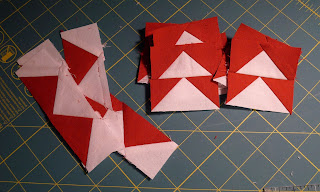 As you can see though, it all worked out in the end! I'm not going to get to assemble this beast tonight, as there's ooone more block, and a lot of big cuts of fabric I need to make, but I will try to get it done tomorrow and post about it next week. My next paycheck is probably going to involve an order to Fabric.com for more red and white.

Sigh. I wish I didn't waste so much fabric on this quilt, but I know it's going to be stunning once it's all finished. I just need to take my time a little bit more. Easier said than done when you're juggling a full-time job, but I'll be dipped if I let this quilt win!

I hope everyone is enjoying the slow but steady transition into spring; I planted two astilbe and a random plant in our front flower beds, and I'm hoping to be lucky enough to see them bloom in a few weeks time. Only time will tell, but if they do (and likely even if they don't) they'll feature in a blog post sometime soon. Until then, enjoy the nice weather!
Email Post