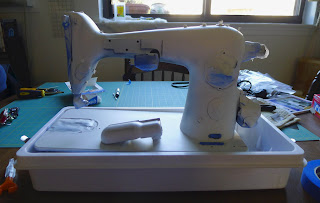 Alright, so technically it began on Saturday, but shush, we're making progress baby!

There's been a couple "Oh bugger" moments already. Hopefully I'm just getting them out of my system! Essentially, I forgot to cover the 201-2 badge, and Gideon's serial number plate. Nuts! Luckily I was able to salvage both with no damage. The serial number lost its lovely golden color, but I figure as long as I keep it clean and protected from rust no harm no foul. Luckily I remembered to cover the Singer badge!

This one is a little more problematic. Due to the blinding sun, I didn't notice that I'd managed to miss most of Gideon's underside, despite making sure I painted it first so that this precise issue wouldn't happen. Sigh. I think I'm going to take my chances when I paint him black on Sunday (I hope, depends on the forecast, if I have time and the weather's good I might do it later this week) and reprime his underside and follow it immediately with the black paint, which according to the directions is totally kosher.

Everything looks good besides my two oopsies! I've got everything covered or stuffed with paper towels and the like, and I don't think anything has made it somewhere it shouldn't be. I don't want to uncover anything until the whole of the paint job is done, if only to avoid jinxing myself.

I should have another update on Sunday when I put the black coats on. After the black cures I get to put the decals on, and then one final coat with clear coat and I will hopefully have a beautiful sewing machine! After this project I think I'll see if I can bribe my Dad into building me a pretty wooden base for Gideon... or see if he'll let me near his power tools over Memorial Day weekend.