So my plans to do some INTENSE sewing this morning were almost thwarted. See, Jess was sleeping in, and I really wanted to sew, so I was planning on moving upstairs both for the better light and for more room. But a guy was passed out in the main common room. "No problem," I said, "I'll just go ahead and use the one next door." Nope, dude was studying something fierce. So I wound up in the pool room.

Meh, whatever works I suppose.

My first order of business was to make a new ironing board cover. Mine was, as you will see from the step by step, in dire need of some love. uHandbag has an awesome tutorial for making one using your old IBC, with whatever yardage you have kicking around that just isn't ever going to get used.

First step, iron the ironing board cover. *head explodes* Ok, just use towels so you don't set anything on fire.

Once you do that, mark a 1-inch ring around the inside. I went for a little more generous of a width, but as long as it's consistent it's not a problem.

Cut the ring out, starting on the inside of the cover so you don't cut through the string. You'll be left with something like the following: 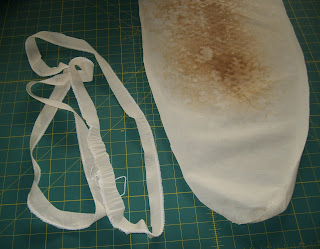 Then you cut out your new ironing cover! I went with some Kona cotton that's been kicking around forever; I love the blue, but I just can't ever find anything to use it with. So, IBC! Cut out a new cover using the remnants as a template, leaving a generous 1 inch margin all around.

Using a combo zig-zag and straight-stitch setting on your machine, sew the two parts together with the right sides together. Didn't matter much for me since it was just a solid color, but oh well. 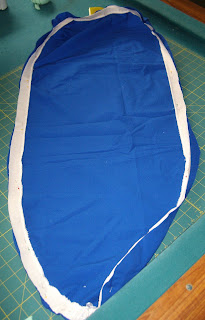 After that I powered through piecing the blocks for half of Christina's quilt. They came out really cool, and I think I'm going to try using them on point--for some reason the pattern is much more dynamic that way, and I think she will appreciate it.

The blocks are about 1/4 of an inch smaller than they should be, so putting it all together is not going to be fun. I will do my best though!

That's all from me. I hope you all are enjoying your Easter dinners; I will be making do with whatever I can scrounge at Commons. But, on the other hand, I plan on going to CVS tomorrow morning to get some cheap candy. Woo!